The Ghost of Arana Gulch, an update...

Arana Gulch, just off "the Soquel Road" (now called Soquel Avenue in Santa Cruz), is full of strange tales. There is one about a woman run down by a drunk driver and left to die on "the Arana Curve". Another talks about a bordello raid, resulting in murder on Arana Creek, and of course, the famous 'Ghost of Arana Gulch.'
Some are not so well known, like a tale of a treasure map found in the hands of a dying vaquero in 1890. The map clearly marked the location of  $40,000 worth of gold stolen from a forgotten bandido heist. It was buried, according to the scrawl on the map,  in a cave up at the top of  a gulch.  At first the map claimed to have been located in Scotts Valley, but, according to its owner, the drawing clearly showed Arana Gulch. Today, the story lives on as "Paul Sweet's Gold." Eerily, in 1865, F.A. Hihn engaged a mining engineer to study the possibility of gold up in Arana and other small creeks.
But what about the Ghost of Arana Gulch? A man named Andrew Jackson Sloan was apparently gunned down by three very prominent local Latinos, members of the nearby Branciforte Villa and Adobe, one of the oldest European settlements in the area. Two were known as Bandidos or 'greasers', and were labeled bandits and thieves. Their names were Rodriguez and Lorenzana. In fact, this gulch originally belonged to the Rodriquez/Loranzana/ Villa(grana) families back in the 1860s and was listed on the maps as "Rodriguez Gulch." It was a much desired land, with rushing creeks, some lumber potential, a rumor of gold, but mostly open grazing land.  (Today, Arana Gulch is the city dividing line between incorporated and unincorporated areas of the county and is classified as greenspace. ) Sloan was gunned down, unarmed, and alone, or so the news accounts say. (See my author's notes page for information on the actual crime.) The inaccuracy of the timeline, the mysterious murder of the key witness, the case thrown out of court from lack of evidence, haunted the community.  This clipping, from the newspaper, dated fourteen years later, raises questions we still can't answer. 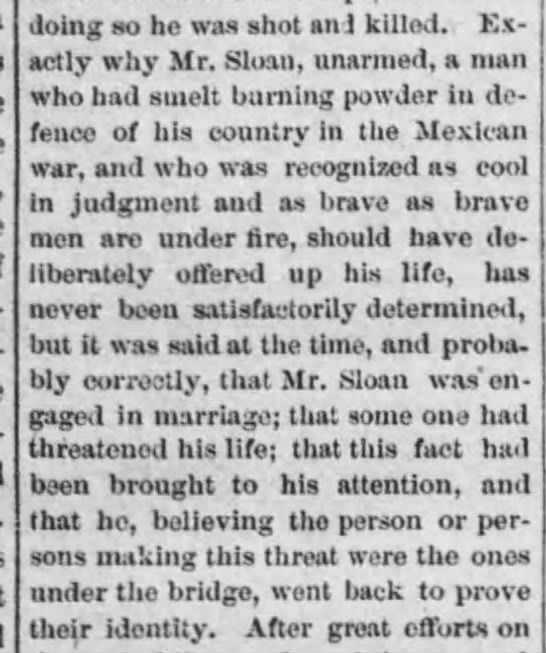 So how did this come to be a ghost story? In July, around noon, Andrew Jackson Sloan officially began his tour as "The Ghost of Arana Gulch." He never made the front page when he was murdered, but in 1895, he got his start on a 149 year long stint as a ghost.

After this sighting, A.J. Sloan was sighted regularly and with drama. A spectre seen in twilight, daylight, or midnight, usually clad in a wide brimmed hat and long coat. He was thin, menacing, and of course, clad in black, his boot steps haunting every back yard and deck along the homes gracing the edges of both upper and lower Arana Creek. (My neighborhood abounded with such tales!) A.J.'s "murder" became an annual Halloween tale that inspired many to learn about Santa Cruz History. One home was so badly haunted by the footsteps and the apparition, a copy of the wanted poster of the time (you can view this at the Museum), was placed on the homeowner's deck to "exorcise" it. Many claimed A.J. haunted folk because he didn't have a headstone. (The top was actually broken off).This was taken very seriously at Evergreen and in 2007, a veteran's headstone was installed. During that installation, the historian overseeing the work noticed another headstone. Rather than disturb it, they simply continued with the installation of the modern stone.  Not much else was done on the plot until 2012 when that historian and I met. He told me that there was a headstone in A.J.'s plot, somewhere over by his new veteran's stone. The elderly historian was not specific, simply because, I think, he wanted me to enjoy a sense of discovery. For that I was entirely grateful. For the complete story, read about that unearthed secret here. 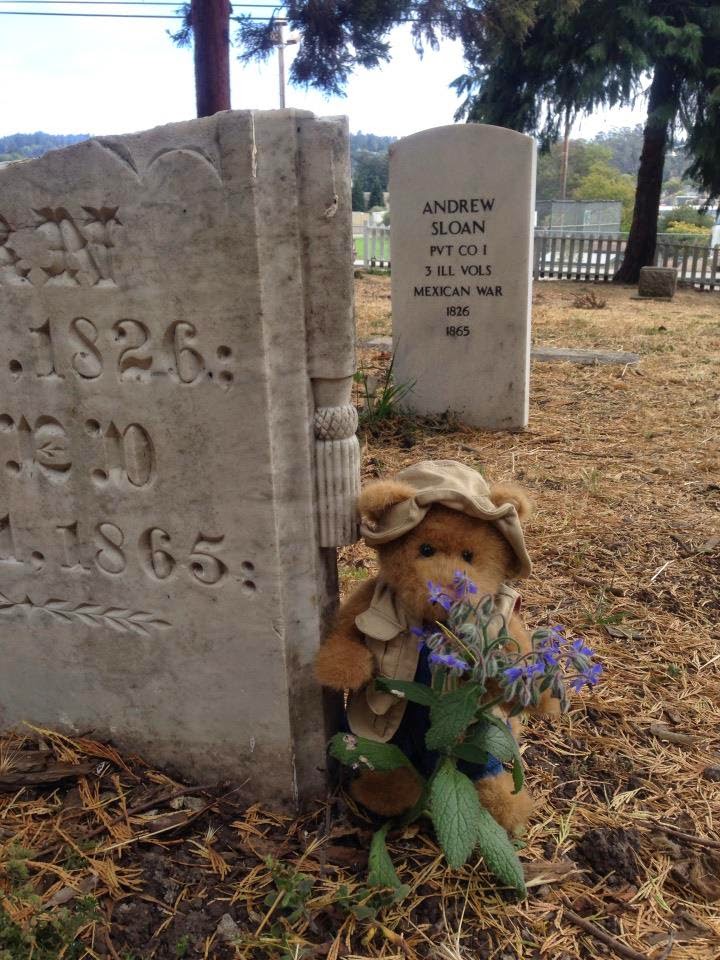 What is A.J.'s real story?
Currently, research is focusing on exactly what happened to A.J. Recent use of Canine Forensic teams have given us a huge clue. A study of a rare collection of federal court documents has given up more clues. During renovation of the headstone base we discovered that 1)both his mother's stone and his were mounted at the same time and 2) of this particular grave site we stumbled onto remains of granulated brick about 5 feet down. To see more on this renovation visit our facebook page.
For a look into some of the theories and facts about A.J. check out a new fiction book called Ghosts in the Gulch or book a tour to see Evergreen Cemetery. Tours are free but must be scheduled in advance due to the closure of the cemetery and renovations in progress. 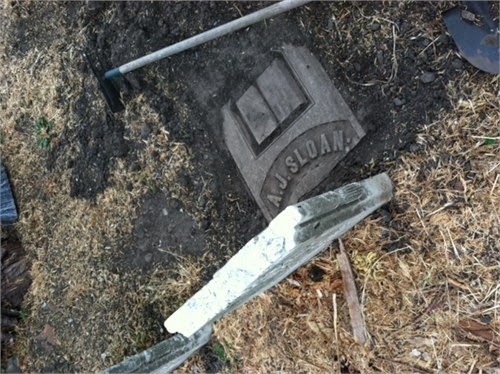 Happy Halloween! To view the complete article on AJ Sloan's gravesite and participate in our upcoming Dia de los Muertos event, drop by The MAH on November 1st to walk the old funeral path to Evergreen. For more information on this event go to DiaAtMAH.

Ghosts in the Gulch on Kindle

Find it at Amazon

Ghosts in The Gulch 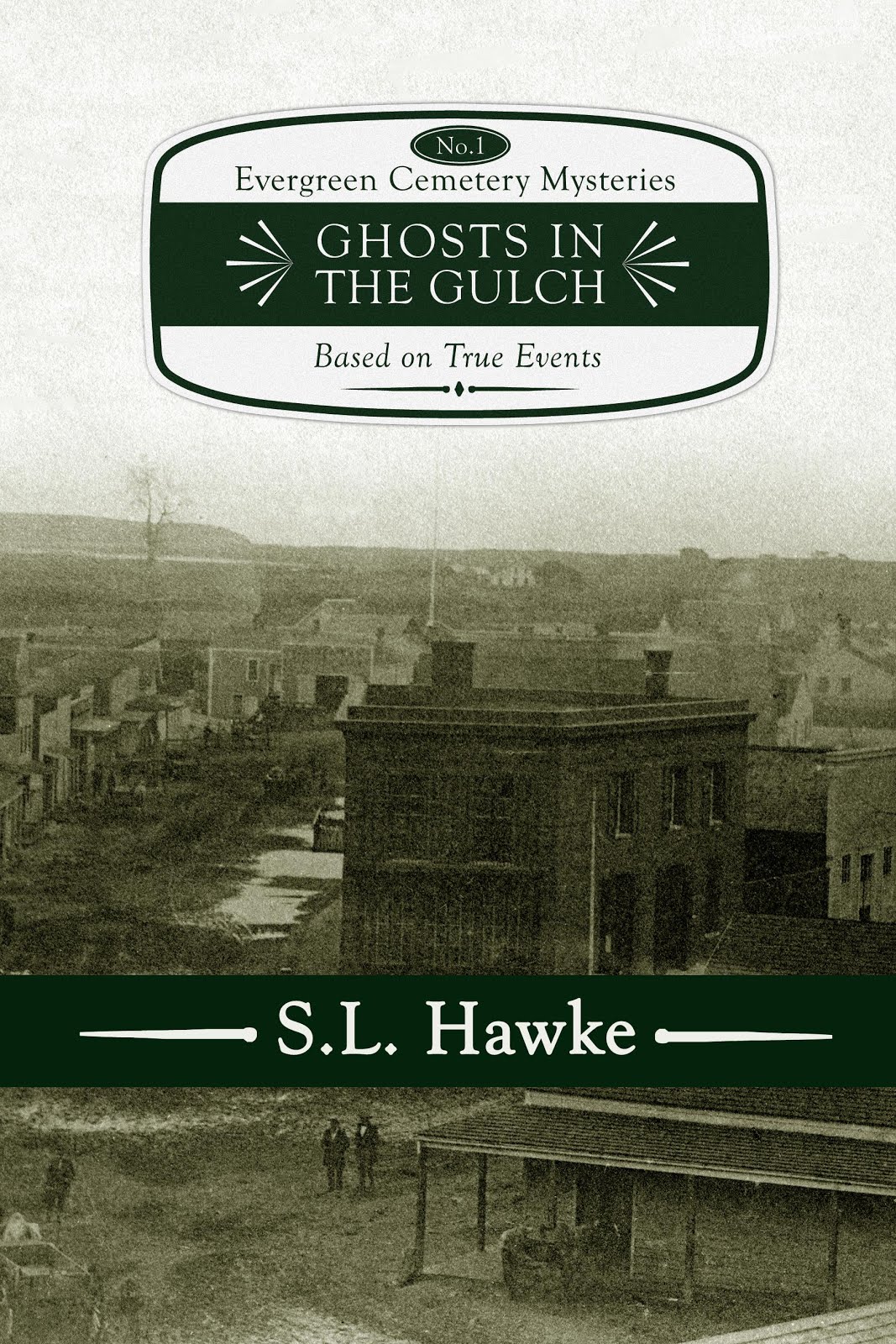 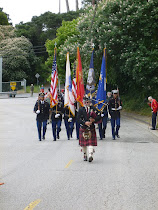 courtesy of the Santa Cruz Museum of Art and History 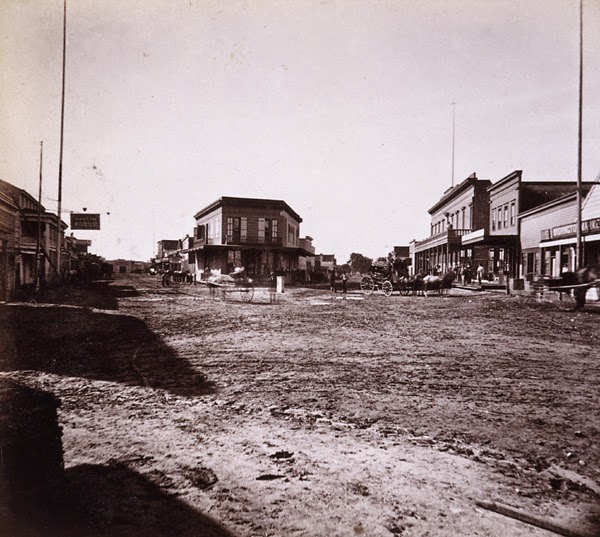